Today Year 5 were given a real lesson in injustice! The class were led to believe that Lexi was said to have ripped up a library book (a thing she would never have done!). She was “sent” to Mrs Butterworth. Don’t worry, Lexi was in on the task and played a great part in the scenario. The class were then asked if they knew anything about the incident.

The class leapt to her defence and reeled off a number of reasons why she could not have possibly done it:
Lexi loves books
Maybe those that told on her were not telling the truth
She was outside at lunchtime
Nobody saw her
She couldn’t possibly want to tear up a book

When the children realised it was not true, a number of reactions were expressed about how they felt over the accusation and the injustice:
I felt like crying for her
I was really upset
I was worried
I could not believe she would do that
That made us feel really sad
I was angry at the children that had accused her
The children then discussed how injustices can happen and the circumstances in which they come

They then had a go and drawing a picture and associating colours with the emotions they were feeling through that scenario.

Today year5 looked at reflection and quiet time in Christianity.
Christians will have quiet time to reflect on the word of God written in the Bible.
They watched a video about Beth, who would sit and read the Bible every morning. She would write parts she liked, her thoughts and her feelings.
She said that it has made her life so much better, improving her relationship with her family and her friends.
We all need quiet time, to think about decisions, our days and our feelings.

Today in RE, Year 5 have been discussing the importance of being honest. They came up with some excellent reasons why telling the truth is important and we’re able to share their views on the subject. Why don’t you ask them what it means to them? 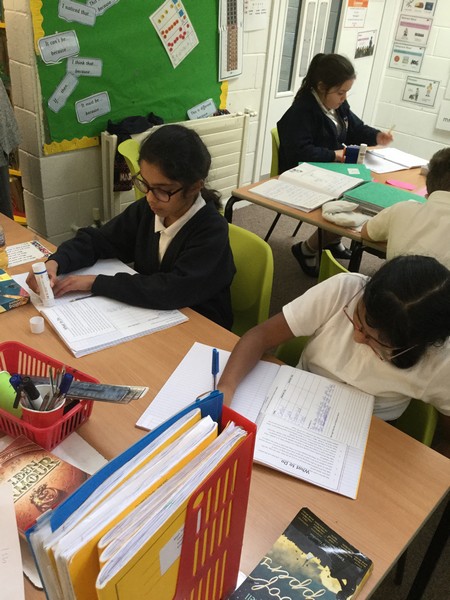 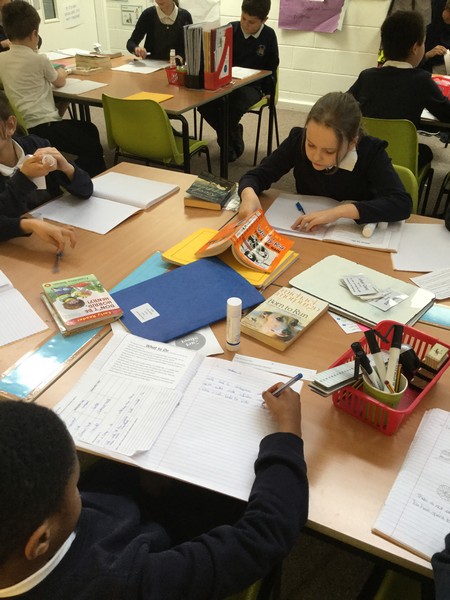 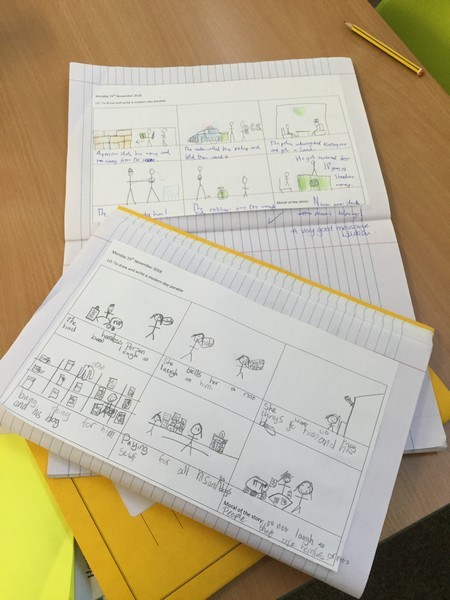 Today, year 5 have watched the story of The Good Samaritan and designed their own parables. They have shown their excellent understanding of why it’s important for people to behave well and were able to offer messages of advice to their readers. 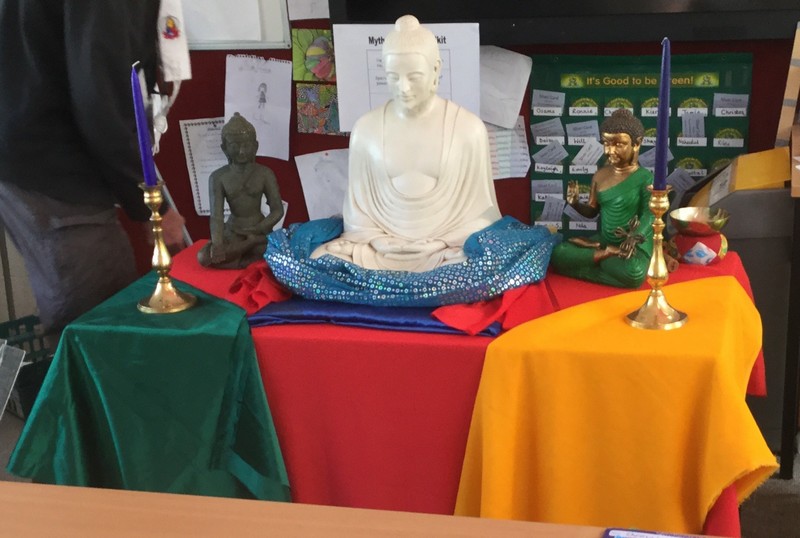 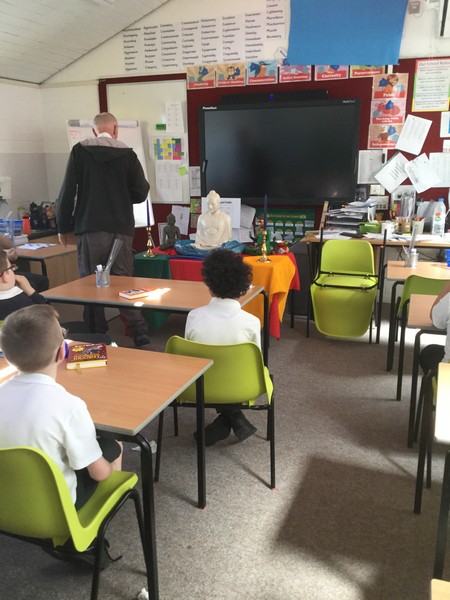 Today, Year 5 had a visit from a Buddhist. He started the session with performing a Buddhist ritual and asked the children lots of questions about what they thought he was doing. They made a very good assumption and asked if he was greeting the Buddha that was sat on the table. He then spoke to the children about different Buddhist beliefs.
They then had a go at meditating. The children appeared to feel very relaxed.

They finished with an opportunity to ask the Buddhist any questions that they had. They all had lots of interesting questions to ask him, including ‘Why do all of the Buddha statues have long ears?’ Apparently there is a myth that states that you can recognise if someone’s a Buddha through whether they have long ear lobes. 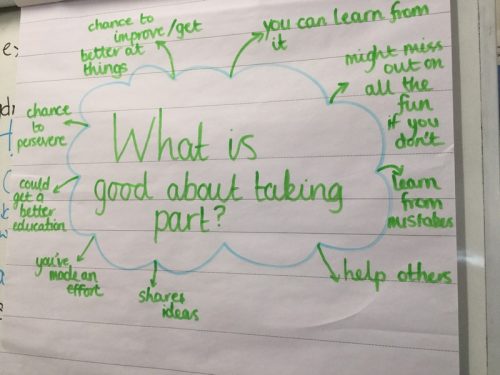 Today Year 5 looked at why it was good to take part.

There were lots of excellent ideas.

Most people thought it was a good idea whereas others thought it depended on whether the activity was safe, worth it or if it made them uncomfortable.

They went on to discuss how perseverance is important and making mistakes is just another way of learning.
Well done Year 5. 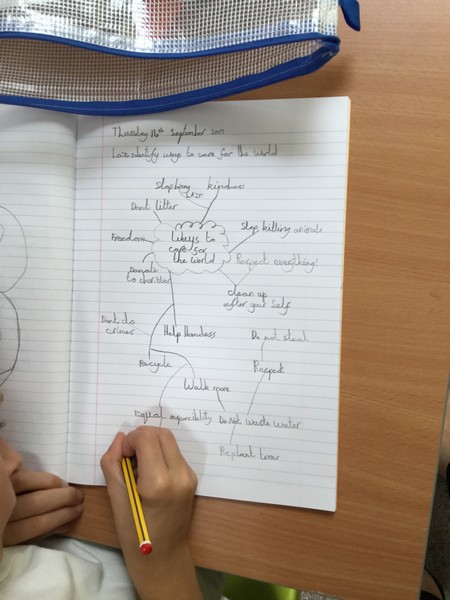 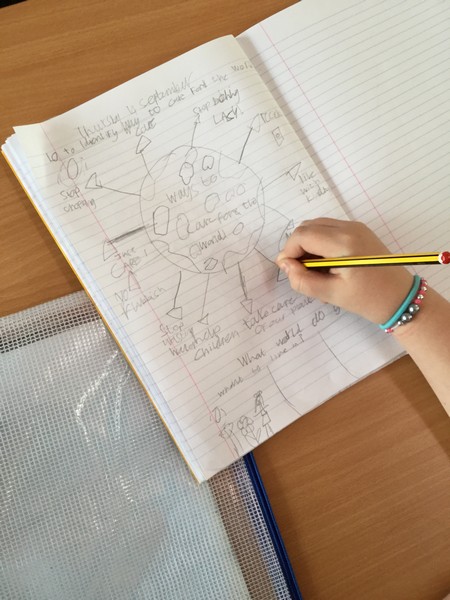 In Year 5 this afternoon in RE we focused on caring for others and the environment. Year 5 came up with lots of really good ideas and we had some brilliant discussions. As a class we created a mind map with ways to care for the world. The children then created their own mind maps in their books, some children became really creative! 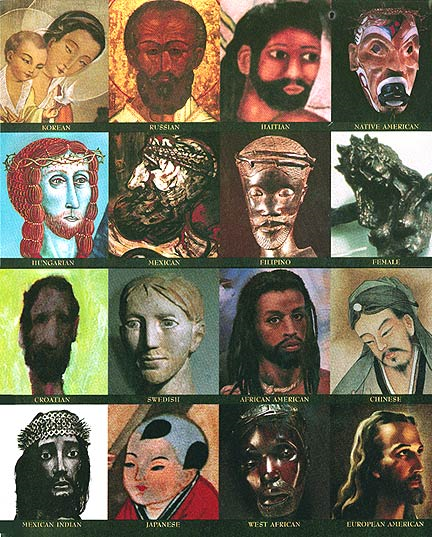 In RE, the class looked at how religious symbols can be expressed and represented differently in other cultures / countries around the world.

The children discussed a collection of varied representations of Jesus and decided that the actual image of Jesus wasn’t important – the importance is in what Jesus stands for and people’s religious beliefs associated with his image.

Kestrels spent some time discussing the lead up to Easter today. We talked about how Jesus prepared himself with his final words for his disciples. He knew he would face Crucifixion and that he would die-unlike his followers- and he wanted them to know that everything he told them was for them to be better people and to think about his words.

He told his followers that if they followed his words they would be blessed. He also wanted them to treat all people equally. He washed their feet to show them that it was not just an act for servants but that they were equal and needed to show each other respect.

Kestrels asked some very thoughtful questions and showed a lot of respect for each other, listening intently and being courteous with everyone’s views.

Through our discussions we established the true meaning of Easter and we will continue this next week.

It was lovely that Nimca contributed so well and told us what the Quran mentions about Jesus (known as Isa in the Quran) and the story of Easter. Thank you Nimca.

The class had lots of examples of people they believed had made changes in society.

The class knew about Rosa Parks, Martin Luther King and mentioned Barak Obama. It was clear they knew why these people had stood up against issues and how change came about. A very mature and thought-provoking discussion Kestrels. Well done.

The children realised that individuals make changes because of their beliefs and as a result, social change occurs.