Today Year 5 were looking at the similarities and differences between Norway and Wales. They have been looking at the two places in depth and today it was the economy.
They began by highlighting the similarities and differences in pairs and then joined other pairs doing the same area to compare their findings before writing a paragraph on what they had found.
There were some interesting facts to be learnt. The economy of each place is very dependent on the terrain (the way the land is- it can be flat or hilly, mountainous or barren). Also, as we have seen, both Norway and Wales are very picturesque (beautiful) and so they both have a lot of tourism (people having holidays and visiting there). Tourism creates jobs and brings the country money. That is part of their service industry. They also looked and farming and agriculture, forestry, sports and recreation as well as transport and manufacturing.
Have a look at them hard at work. 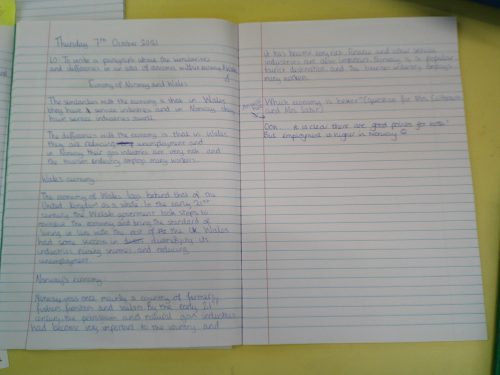 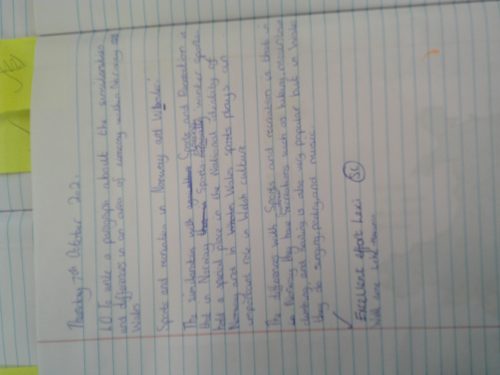 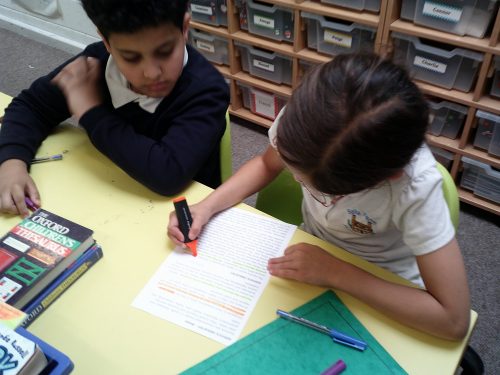 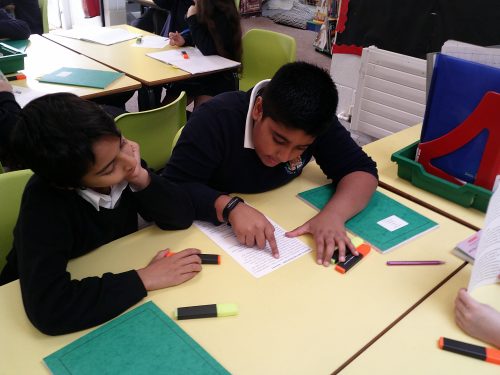 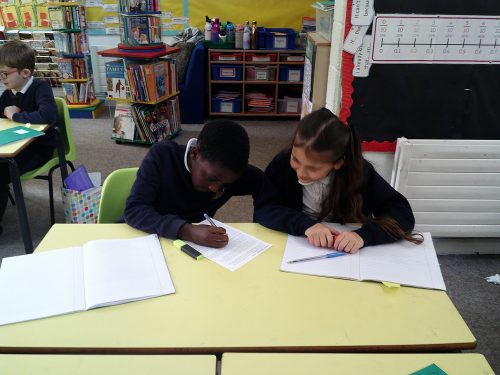 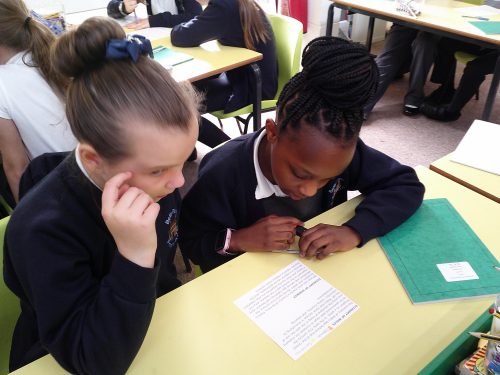 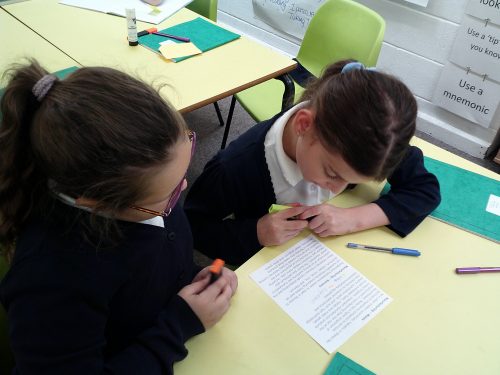 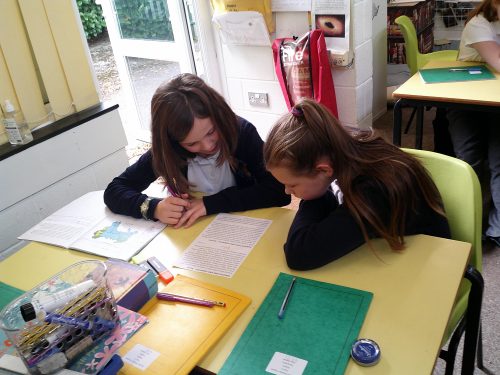 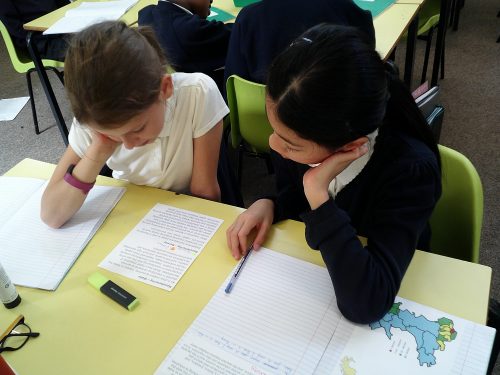 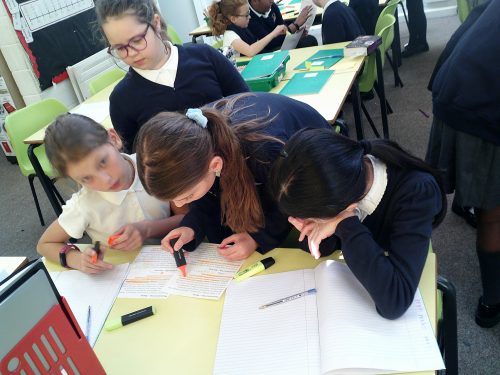 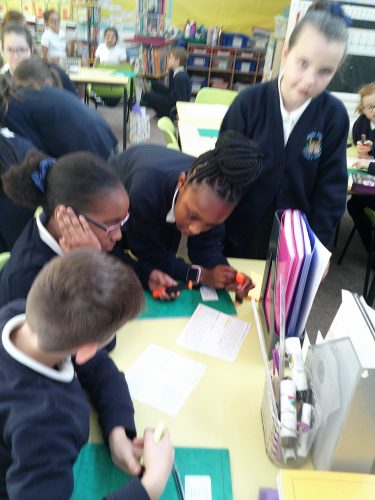 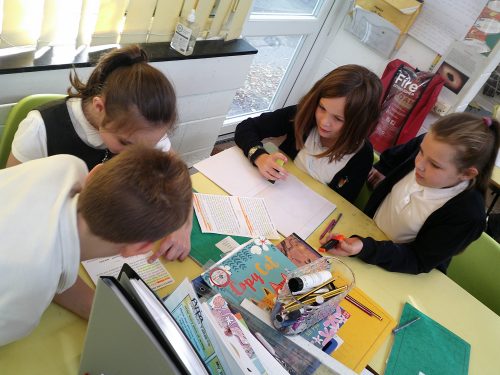 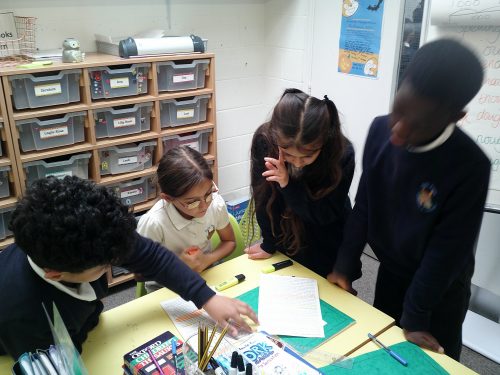 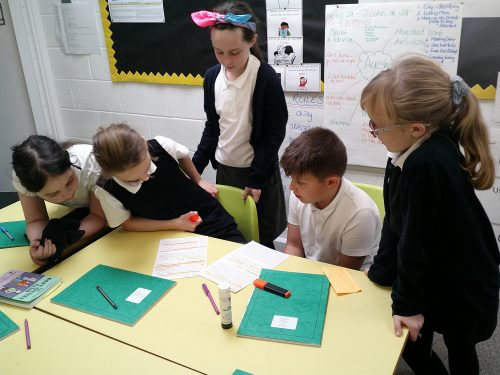 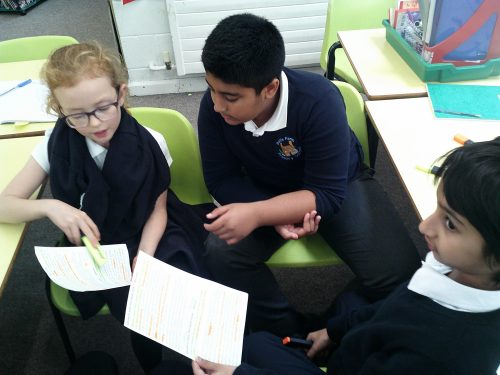 Last week, year 5 started their Geography topic on Norway and Wales. They have been learning all about the country’s similarities and differences and focusing on the cities of Cardiff and Oslo. They have studied atlases and digimaps to locate various places on their maps. Today, they focused on the different climates of both cities. They learnt about what life is like in Norway, why not ask them what they learnt? 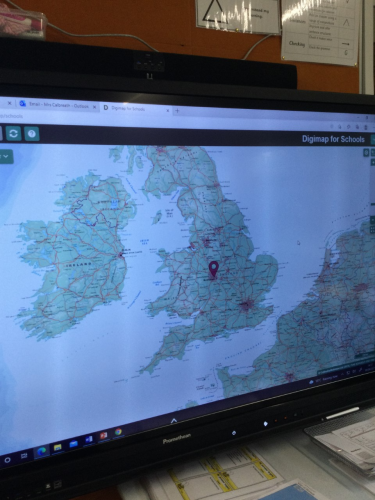 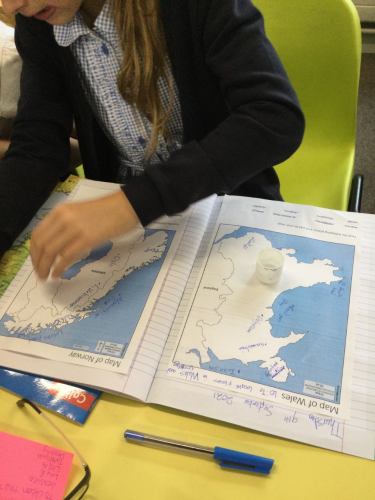 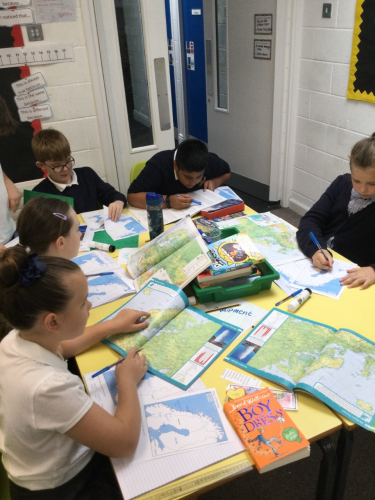 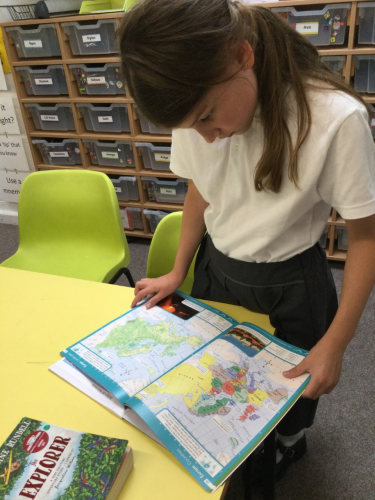 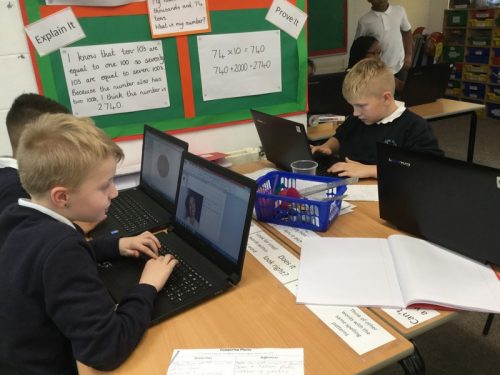 Year 5 have been researching different places in the world in order to highlight their differences and similarities. They are going to use their research to produce a poster all about the interesting facts they have recorded. 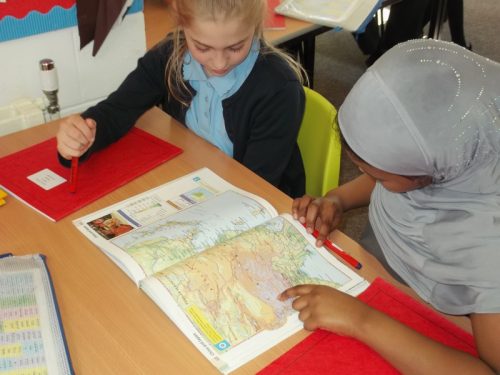 We spent some time looking at the different representations of maps and the information they give.

There was a lot to take in and some interesting facts were found.

Lots of children found facts about countries, such as population size.

Daneil found out that 1% of Americas population is over 90 years old.

The class worked collaboratively to look at the different maps and found that all maps have some sort of key which explains the details on the map. The key could show:

The class went on to looking at maps of Paris and discovering the human (man made) features and the physical (natural) features found in France.

Today Kestrels shared their first homework projects that they have been working on this week. The class enjoyed looking at other children’s work, discussing different ideas and presentation techniques. All children gave very sensible positive comments and thought of opportunities for pieces of work to be developed further.

Children were enthused to use some of the new ideas they’d seen and work even harder on their projects for next week.

Emily – It was more interesting because it let you show your own ideas.
Hanson I enjoyed expressing more creativity.
Josh – I enjoyed the freedom.
Leo – I really liked seeing how different people presented their ideas.
Fabian – It stood out that they used a lot of well thought out language.
Nimca – People took real care in their presentation.
Ben – I was proud of the work I did and enjoyed the positive comments people gave me.
Jessica = I put loads of effort into the work and was pleased to get lots of good comments.

As you can see they filmed in front a green screen reading out their weather scripts. The scripts were written with Mrs Sabir in a previous English lesson – see earlier blog post. 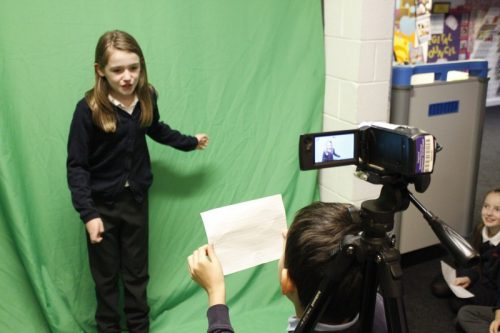 During Computing today, Year 5 Kestrels learned how to put a weather report together. They filmed themselves in front of the green screen presenting a weather forecast using the scripts they wrote with Mrs Sabir during an English lesson.

We’ll have the final video of their work on the blog later this week. 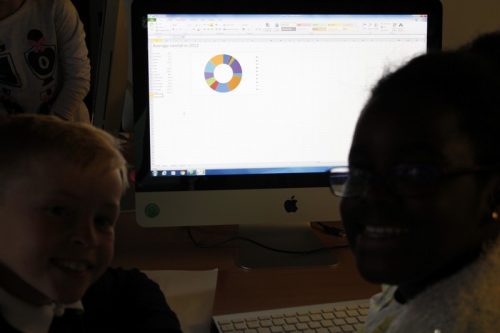 During today’s Computing with Mr Baddhan, Kestrels have been learning about Microsoft Excel and how it can do alot of Maths work for you.

The children worked through some historical weather data and added it into Excel. The date they were focusing on was the average rainfall for a specific year. They then were shown how to get the average, sum and create a bar chart.

In Year 5 we are experimenting with a different style of homework.

In addition to the usual number facts and spellings that children have to learn, we are sending home an open ended piece of homework. Each piece will only have a title – it is then up to your child’s interests / creativity to take the homework in the direction they wish.

Each week the class will review the work that children produce, with children developing their own success criteria to assess against for each piece of work.

This week’s titles are Arrays and Earthquake, giving children the opportunity to explore the work we have been doing in Maths and Geography.

We can’t wait to see the wonderful work that the children produce! 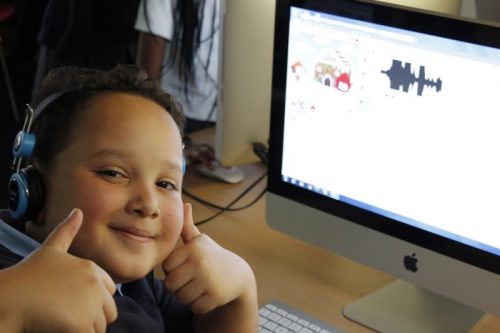 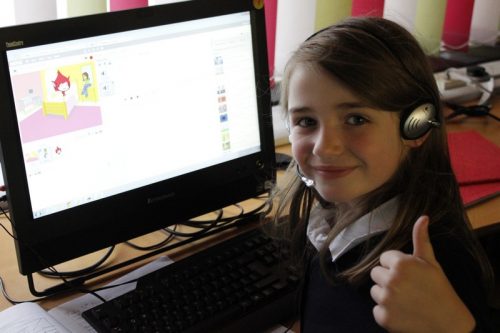 During Computing with Mr Baddhan, Kestrels have been using Scratch to program their sprites (characters) to have a conversation about mountain facts, which they have learned in their Geography lessons.

They have learned to add wait block when one sprite is listening to the other sprite talk.

Kestrels have today started to record their facts into Scratch and then add their sound blocks into their program.

We’ll have the final pieces of work to share with you on our blog tomorrow. In the meantime, you can see the Kestrels working on this project.