Hi Kestrels, I have received some lovely writing pieces from children. A very well done to Evie, Sumaiya and Joey for completing one of the writing challenges and sending them in to me. I have loved reading them so maybe a few more of you could complete this week’s challenge and e-mail them to me at teacher@bellsfrm.bham.sch.uk, I would love to read them.

Last night I heard faint cries coming from the attic. I knew something strange was coming and so I had to brace myself. A bitter taste was in my mouth, daring me to do it. I took the rusty old step ladder and put it in place. It was pretty heavy. I heard more movement. Reluctantly, I climbed the ladder; it was so old it nearly gave way.

I gasped! I was scared so I hid behind a bookcase nearby. My eyes look round frantically as if I was trying to find something. I had found it! An old suitcase. A leather handle was attached which fell off and crumbled in my hands. I opened it and inside there was a single sheet of silk wrapped around a cotton frayed map.
There was also a fragment of something which felt like wood. It was hollow on the inside, holding parts of which looked to be a space ship. Maybe this artefact was from an engineer , who lived in this very house. There was also a plan of how they built something. They looked very complicated ! Scratched into the suitcase were the letters : M.H. I did some research and I think these items ( preposterous as it might seem ) belonged to Margaret Hamilton – Lead Engineer of the Apollo 11.

One day, as I was helping my mum clean the attic, I suddenly came across a dusty, old suitcase. The suitcase was very big, made of metal and was all rusted.
At first, I did not want to open it but I became very curious so I ended up opening it. In side there was a ton of stuff. There was a family photo, a camera, a secret diary, some old reading glasses, a teddy bear and last but not least an ink pen. All of these objects were covered by nothing else but dirt.
The objects were all ruined. For example, the camera lenses were all smashed, the tip of the ink pen was crooked, the photos had faded away, one of the hands of the reading glasses came off and lastly the teddy bear was the only thing that was not ruined. 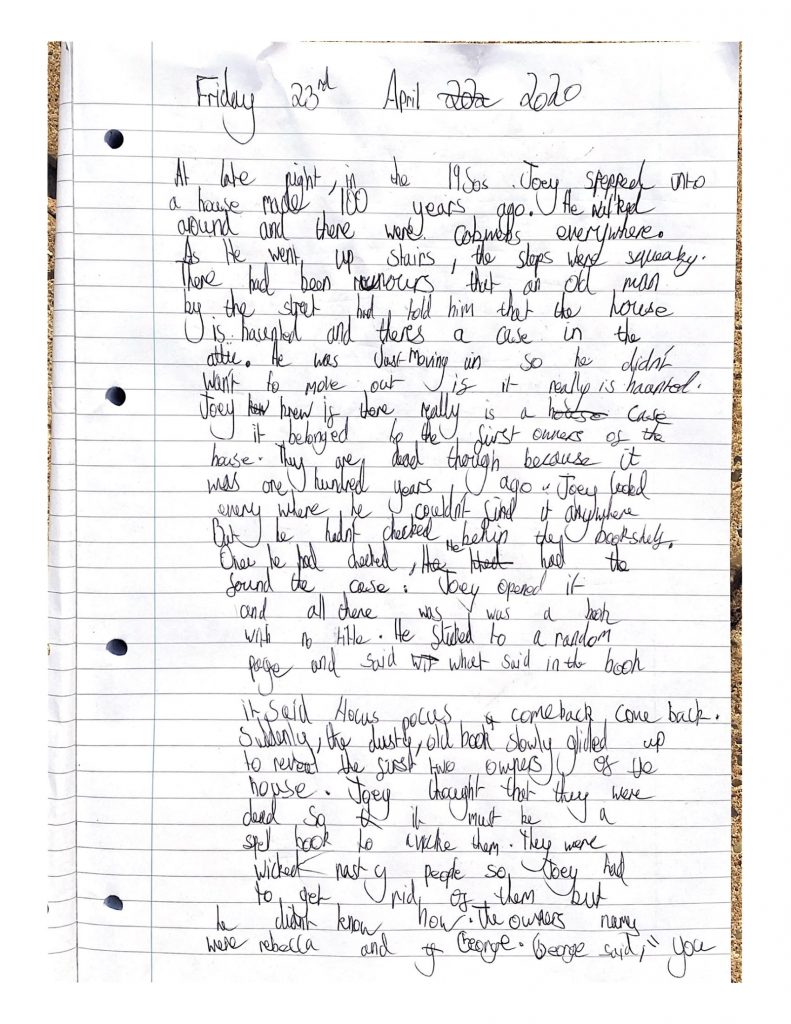 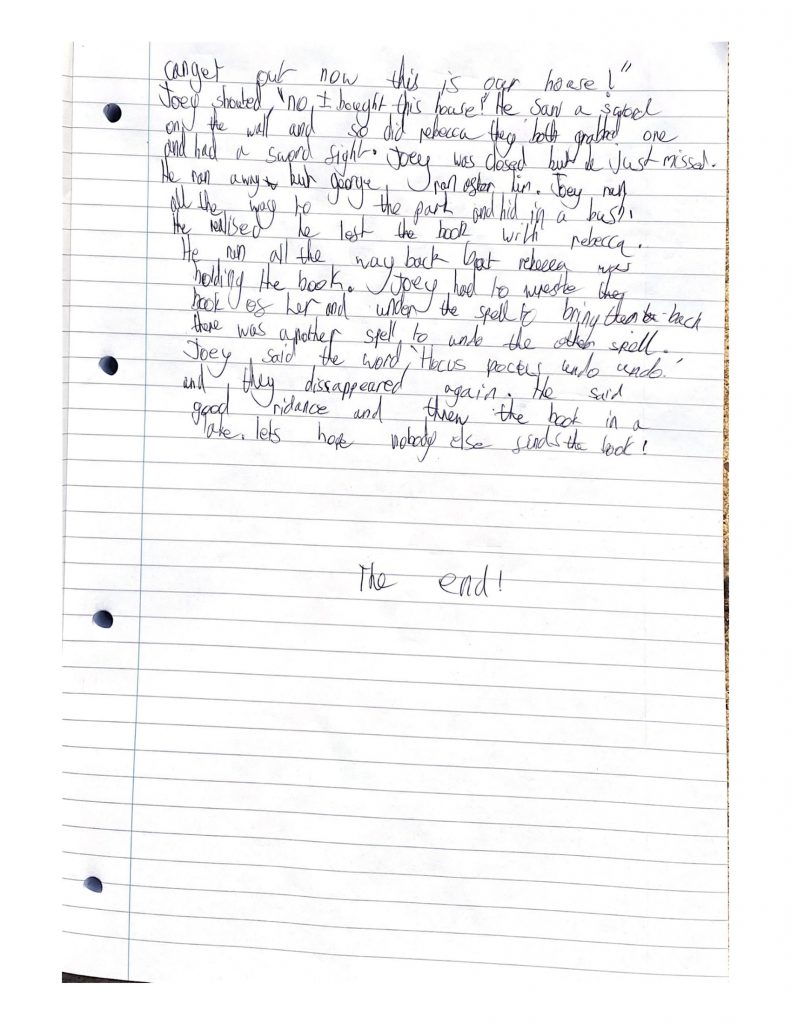 Hi Kestrels, here is my corrected paragraph. Hope you spotted all my mistakes. Mrs Calbreath.

Well today was a lovely day, it was my turn to go into school and teach the few children who come in every day. Harry was especially pleased to see me (his favourite teacher) sat there with a cup of tea first thing in the morning. We started the day with Joe Wicks, my goodness it was hard! Neither Miss Potter or me could get down to do the press ups, much to the children’s amusement. The day was then filled with maths, junk modelling and art. We had lunch in the hall and then the children asked if they could watch a film; they chose Home – it was very entertaining and kept them quiet for ages. I have said I will bring some jigsaws in tomorrow as the children would really like to do some. It’s also one of my favourite things to do so I think I will enjoy myself too!

Hi Kestrels, hope everyone is ok and staying safe.

Apologies for this being late, our internet was playing up yesterday.

Have a good week and look forward to seeing your writing tasks soon.

Hi year 5 kestrels…here are your answers for the maths work set on Monday. Hope you’re all keeping well.
Have a super weekend. From Mrs C ?

Hey there year 5… I hope you’re all well and keeping busy.
Here are 10 spellings to practise and get someone to test you on. I’ll be sending these every Friday so you don’t forget them!

These are all words where suffixes and prefixes have been added:

Stay safe and hope to see you all soon.

Hi all my lovely year 5 kestrels… Welcome back after Easter. Hope you’re all happy, healthy and full of chocolate eggs!

I know that a lot of you will be missing the chance to write so I’m going to set you a writing task each Monday. You can send it to me using the teacher e-mail (teacher@bellsfrm.bham.sch.uk), I would love to read them.

SC… As well as some interesting adjectives, make sure you use a range of sentence types (Remember: short sentences will build tension and add some excitement to your piece).
Expanded noun phrases will work well with this too…inside the heavily-worn dusty old case found behind the chest of drawers. 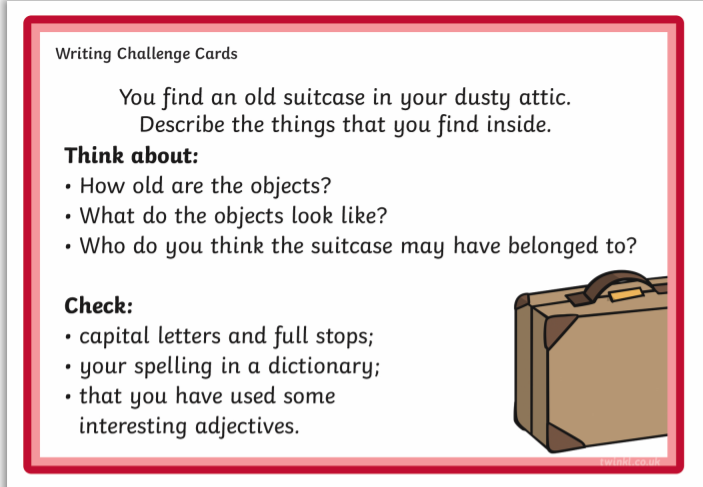 Here is some short maths work that you can complete each day. It includes a 4 a day (as we would do each day in school) and fluency practise for number facts and times tables.

Here is some short English work that you can complete each day. It includes paragraphs to edit and improve, some spag related questions and some spelling practise.

Answers for the activities set on 30th March 2020.