I had just finished the term at school and now it was the summer holidays. My mother and father were going on holiday and I decided to go and spend the summer at my friend Amelie’s house. She lived in a countryside manor and it took a four-hour train journey just to get to her house!

Whilst looking out of the window, I marveled at how the smoke-polluted cities turned into meadows filled with buttercups and daisies. Wild flowers grew in amongst the hedgerows near rows of neat houses and bees flew in swarms wherever I looked.

The train eased to a slow stop at yet another station. It was mine. I got off and looked around. It was the first time I had been somewhere like this. My friend and her Dad were stood waiting for me at the station next to their shiny black Rolls Royce ready to take me home. A rusty van sped past us and once it had gone out of sight I saw two people on the other side of the road. It was Daisy and Hazel from the book I had been reading on the train (Murder most unladylike: Jolly Foul Play!) They were even wearing their Deepdean uniforms! Could my eyes be deceiving me? I thought they were only fictional characters.

It was almost dark when we arrived at Amelie’s house and so I went straight to bed.

I woke up the next morning to a shrill scream! Immediately, I knew it was the maid – Antionette, for she had a very distinctive French accent. The sound of tears followed and I bolted downstairs as fast a jaguar racing for its prey! The sight that greeted me was very unpleasant. Antionette stood sobbing over a laid out body. It was the butler, he was DEAD! His scrawny arm lay over his head, covering his eyes and near him candle wax was sprayed up the wall. Flakes of diamond were scattered on the carpet nearby and a big pane of glass was missing from the large window panels. An empty hessian swag bag lay near the body. Could these be pieces of evidence?

The news of the horrible incident quickly spread and the police were soon called.

Inspector Priestly looked as though he had a lot on his mind; while the tall, thin police constable, Pugh, busied himself taking a statement from the shaken maid.

It was clear from the maid’s account that the butler must have died sometime between 6:30 and 8:30am whilst she was preparing our breakfast because she hadn’t seen the body or anything else out of place when she first came down downstairs. Hadn’t she heard anything? I thought this was very strange.

However, Constable Pugh seemed more interested in the fact that there was a hessian swag bag nearby and I heard him muttering to Inspector Priestly something about the villainous Grandma Swag! She hadn’t been caught after her gang’s last big heist and it seemed the police were now convinced that she was somehow involved in the poor butler’s death!

It was at that moment, my friend Amelie appeared at the front door with Daisy and Hazel. Before I had seen them yesterday, I had thought they were just fictional characters. I was so pleased to meet them! They are my heroes.

They came over to me and we talked about the situation. “We need to find the murder weapon” hissed Daisy so as not to be heard. Hazel, who had now made friends with both me and Amelie, begged her to do something in a whisper. After their secret conversation, Daisy offered us both a place as members of the Detective Society.

I was delighted to be asked and felt honored that they would consider me, and clearly Amelie was too. She nodded her head excitedly and a big smile spread across her face, from cheek to cheek. Hazel was happy that Daisy had even considered letting us join. Arm in arm we all rushed outside to hold our first meeting and discuss the new case. We were determined to solve this mystery before the police did! 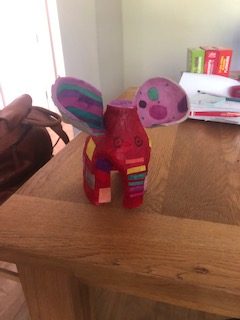 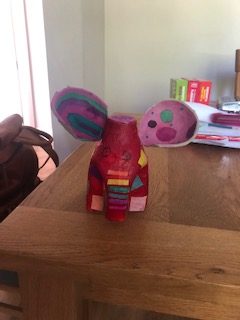 Hi Kestrels, how are you all?

Well, we’ve nearly come to the end of term and what a strange term it’s been. Thank you to all those children who have been doing the work on the blogs and sending in some excellent pieces of writing! You should all be extremely proud of yourselves, everyone here certainly is!

We are putting on some maths and english activity booklets for you to do over the summer. There’s all sorts of fun things in there to do and should keep you busy. Don’t forget to keep up the reading!

To anyone coming into school next week, we can’t wait to see you!

Happy Holidays and see the rest of you in September.

Stay safe and have a fabulous summer.

This week, Sophie has enjoyed making these elephants. 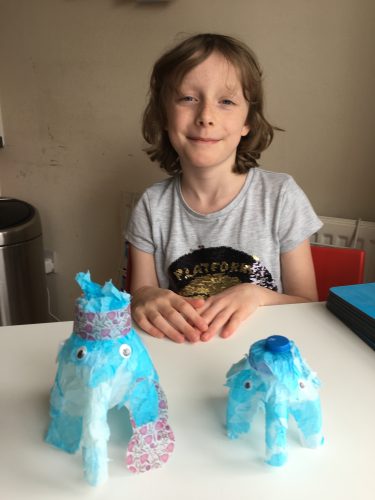 She has also been coding on scratch and practising on Times Tables rock stars. Sophie watched all the first aid videos with her Mum and made a little first aid pack of her own with supplies and instruction cards in.

Here is Sophie’s entry to this week’s writing challenge.

Here are the answers for this week’s maths…

Hi Kestrels, only 2 more weeks left of this term (hard to believe how quickly it’s gone!)

One very important reminder for you all…… Monday and Thursday next week (6th & 9th) will be the very last book exchanges. This will be the only chance for you to pick up a book for the Summer holidays so please come along. It’s between 12pm and 2pm, we would love to see you. It’s very safe as only one family are allowed in at a time and once inside, social distancing is compulsory. Mrs Johnson is here with a huge selection of books for you to choose from.

Here is your learning for next week:

Link to White Rose videos below…

Have a lovely weekend and I hope to see you all next week.

Have a lovely weekend Kestrels, and I look forward to seeing some of you in school very soon!

Sophie has been keeping busy this week.

This is Sophie’s beautiful crystal tree she created at home! 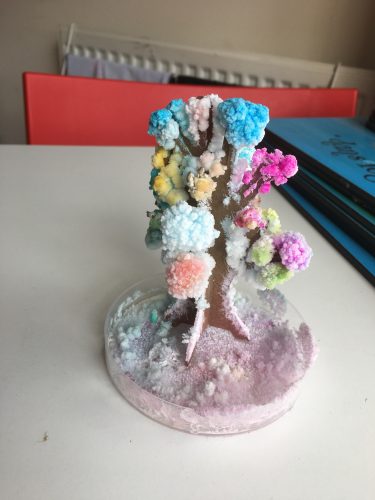 Well done Sophie, you have been working hard!