The class had some time today to sharpen their skills on Ed Shed and TTRS.
It was easy to see who has been practising at home.
It is important that we practise everyday so that we can complete our Year 5 and 6 words, as well as be quicker with out times tables. We know that confidence with our spellings helps us as writers and readers. Confidence with our times tables helps us with everything in maths, which is so important.
Keep up this confidence year 5.
Year 5 were delving into poetry this morning!
They were all written by the poet Rachel Rooney. Here is a bit about her… 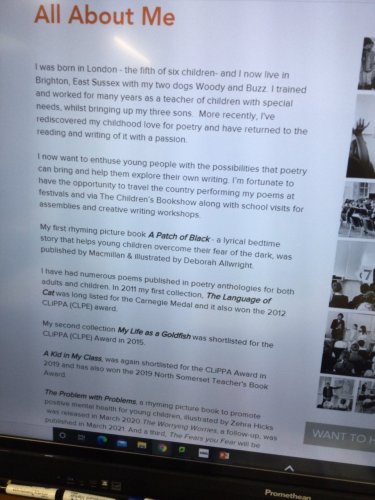 The class had fun reading them… 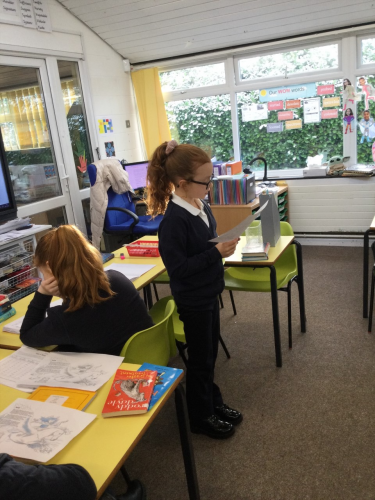 and discussing them. There was so much to think about. We could relate to each poem, the children even felt like they could describe the children they were like (as well as who in our class they are like! All done in a very positive and kind way, even with the Fidget poem). 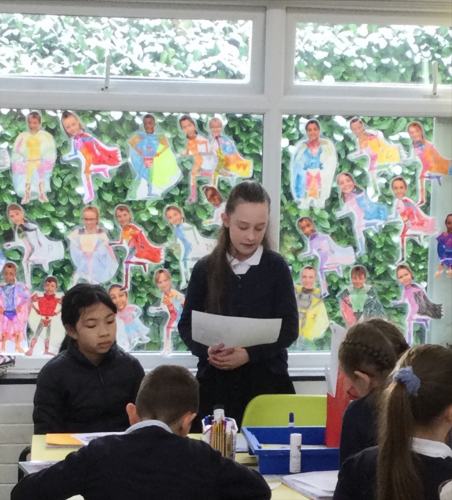 It made such a difference in how the poem was read… very emotional.
Have a look at the wonderful poems. 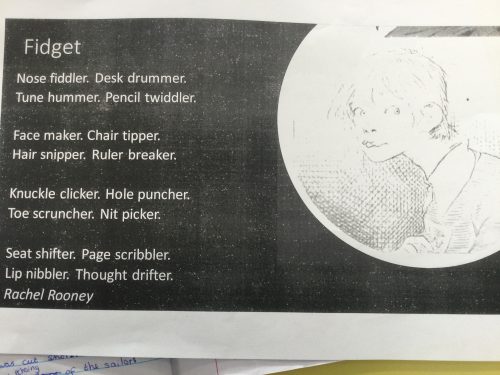 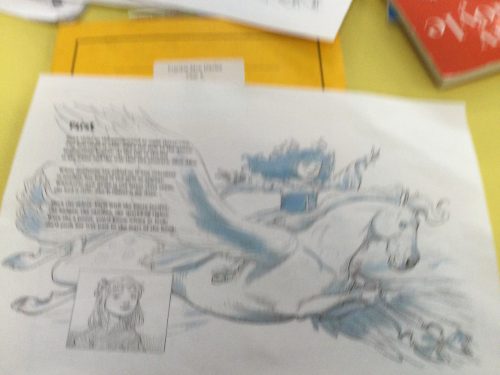 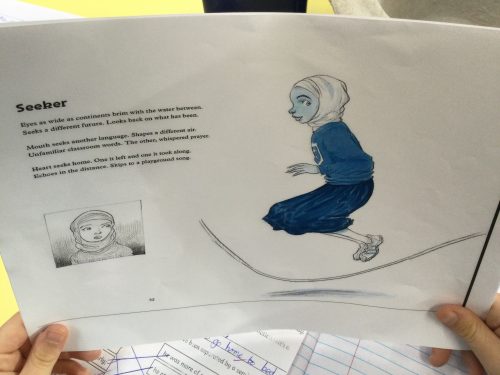 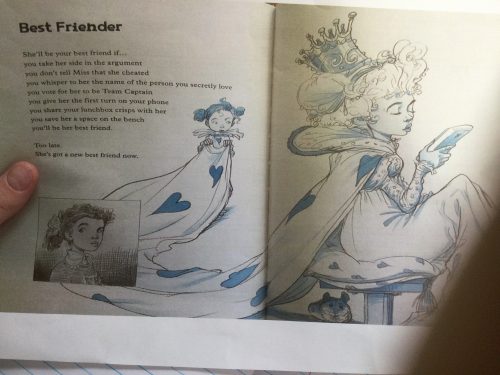 Amaya and Lexi have learnt a song that teaches them the numbers of Pi.
No spelling mistake….I did mean Pi and not Pie…Hee hee.

But what is Pi? 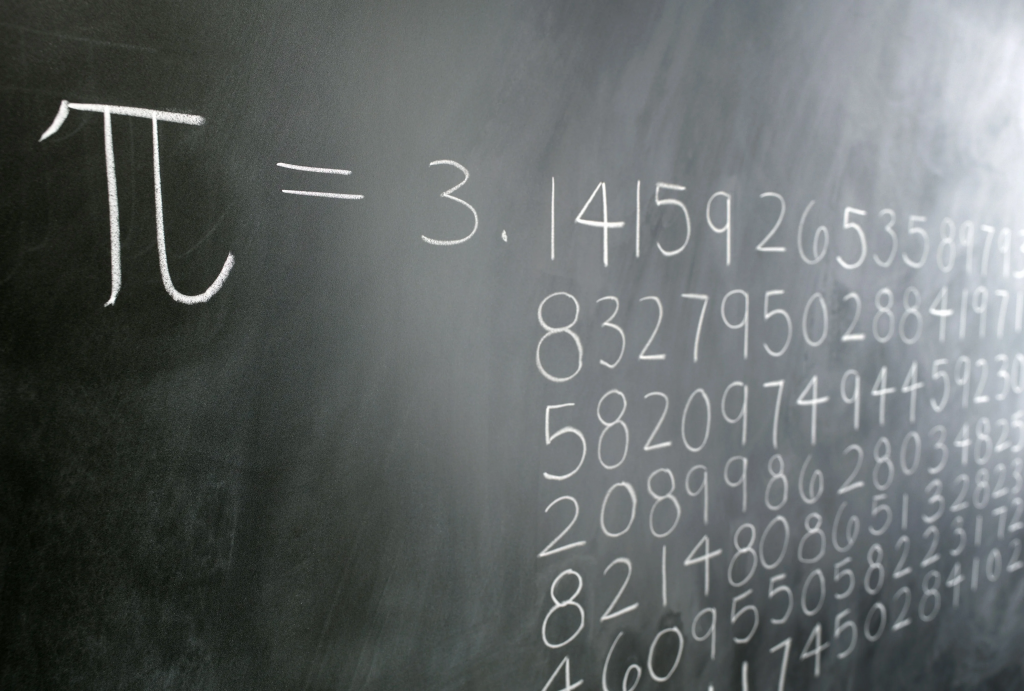 Succinctly, pi — which is written as the Greek letter for p, or π—is the ratio of the circumference of any circle to the diameter of that circle.

And what is the point of pi? 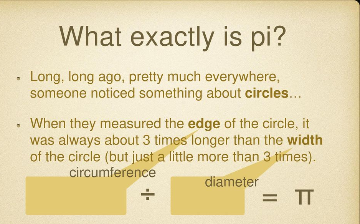 So there you have it. Pi.
Have a look at Amaya and Lexi singing Pi.
Amazing girls, well done!

Today Year 5 tested their parachutes. They had previously designed and made their parachutes with a view to testing their hypotheses out.
They were varying sizes and shapes but they all held a toy soldier at the bottom.
The class then dropped their parachute from the same height and timed how long it took to reach the floor. After doing three drops they worked out the average of the three. Do you know how to work out the average of three times?
They added the three times up and then divided the answer by 3 (because there were three times). This gave them an average drop time.
They found that parachute Number 5 had the slowest drop time, over 2 seconds. This meant that it had caught more air coming down, this slowed its fall down, because there was more air resistance.
Having watched each other dropping the parachutes it gave the class an idea of how best to keep tests fair. Being precise on the height, the angle, how you hold the parachute to drop it and accuracy in calling to drop and stop recording were all important.
Well done Year 5, you worked hard on the experiment.
Year 5 began their exploration of gravity and air resistance this week.
They were all given a plastic bag, wool, Sellotape and a small plastic figure.
They worked out what type of parachute they wanted to make and then constructed it.
Have a look at how they did with their designs. Do you think they will be effective? Why?
There were a number of different designs and ways of attaching their plastic figure.
They will test them to find out how effective they were and if they needed modifications.
The children all predicted which of the class’s designs they thought would fall the slowest, which would mean the parachute created more air resistance.
Today Year 5 were investigating cubes and cubed numbers.
They looked at making a square with 6 cubes….it was impossible (no matter how much they tried). They added 3 more cubes, so that they had 9 cubes, and tried again. They definitely made a square with 9 cubes.
They continued with more cubes and then went on to investigate cubes, seeing that they were 3D shapes and that they needed the same number of square across, up and along.
So adding to our numbers which are square numbers, we now know what cubed numbers look like.
2 squared is 2×2= 4
2 cubed is 2x2x2= 8
Have a look at the cubes they made.

Today Year 5 investigated square numbers. They arranged arrays to see what shapes they made. When they tried 3 x 3 it made a square shape.
We could see that because all the sides were the same.

The children then made more square numbers and saw that each side needed to be the same: a number multiplied by itself is a square number.

Have a look at what they did. 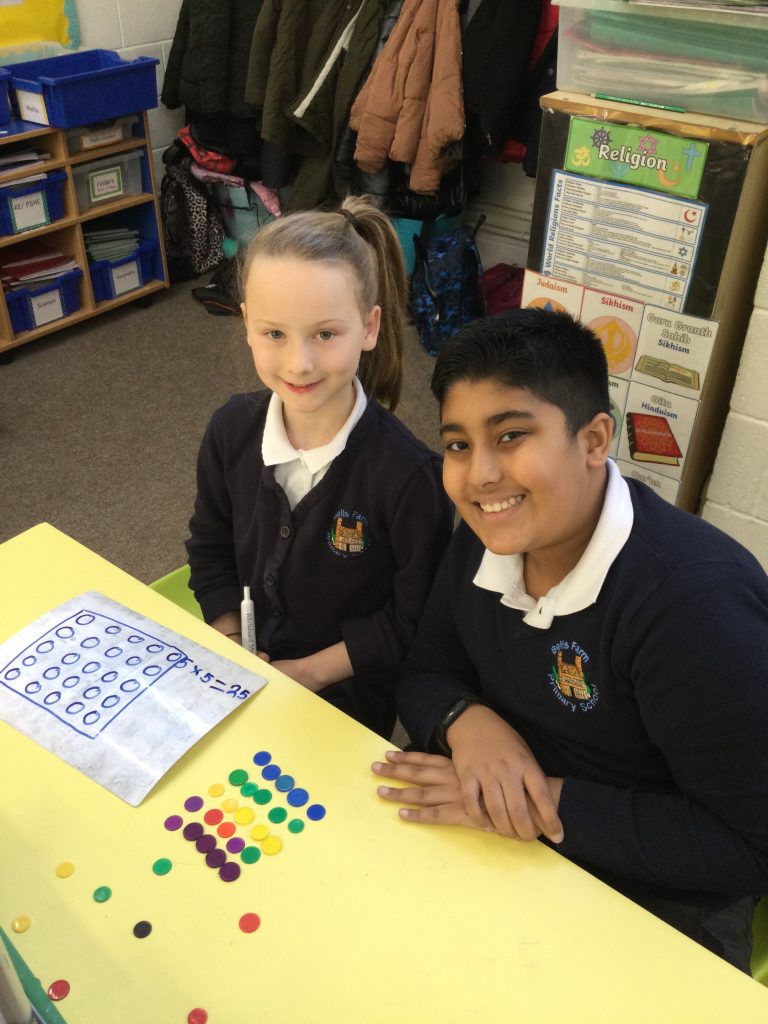 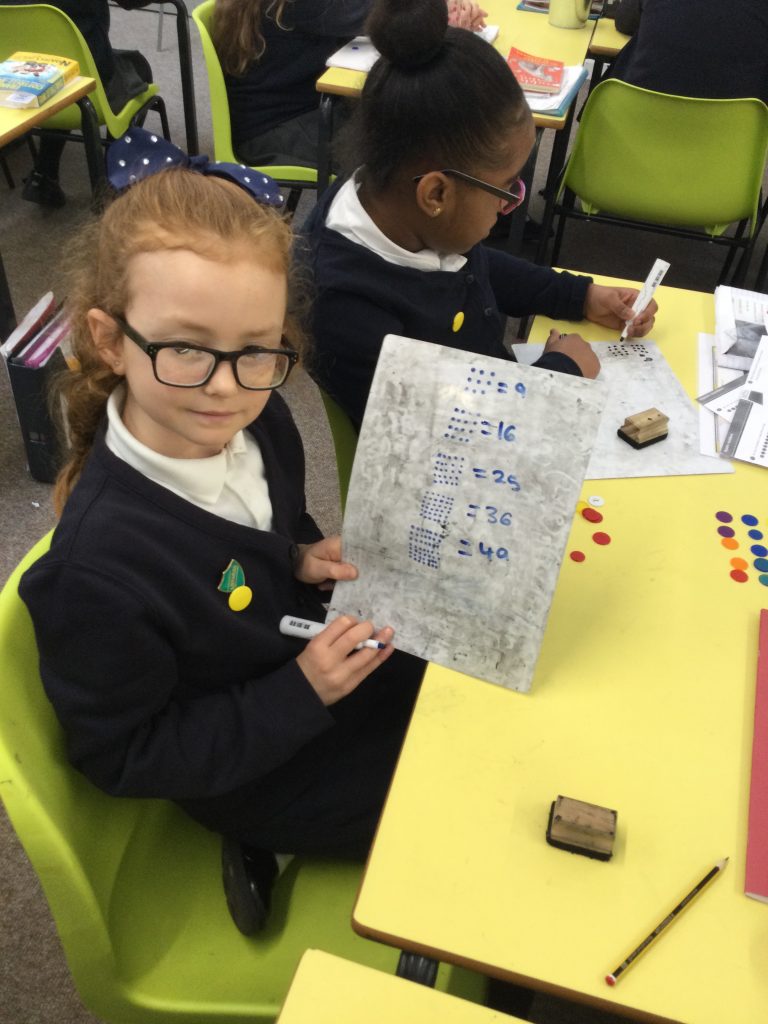 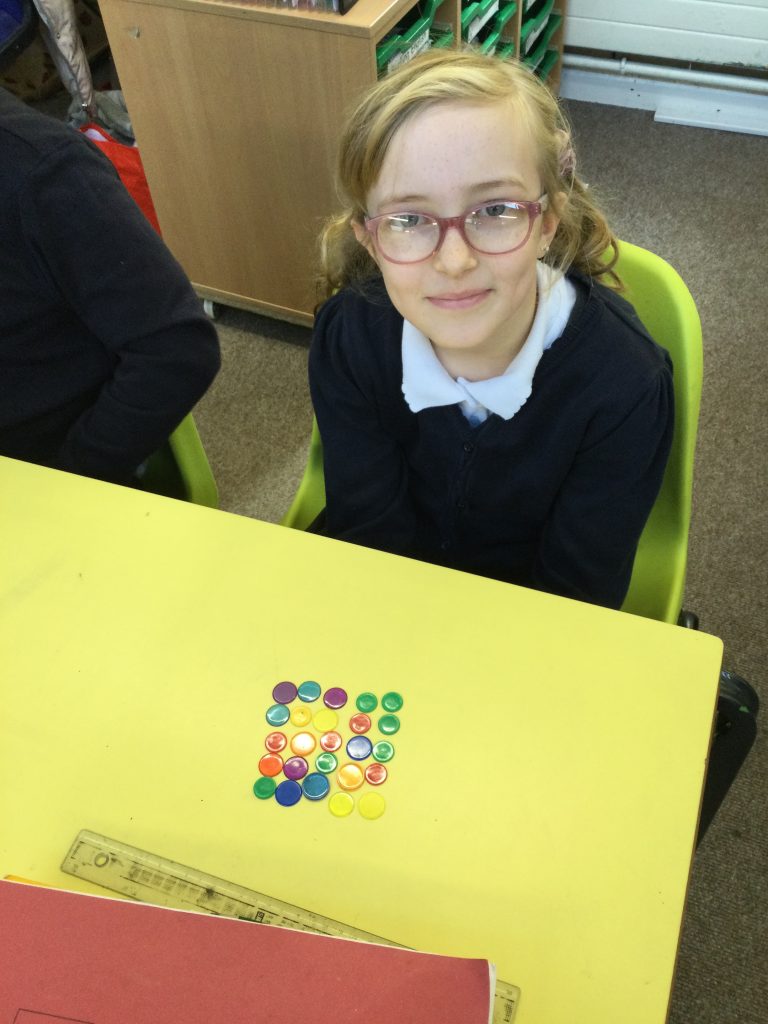 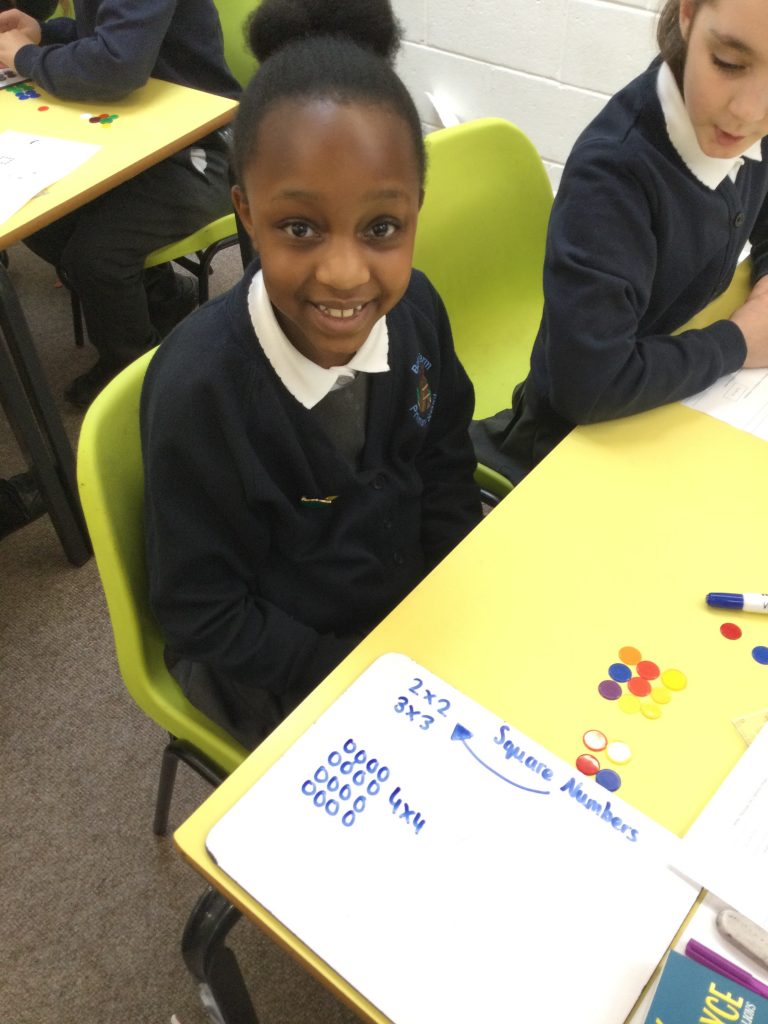 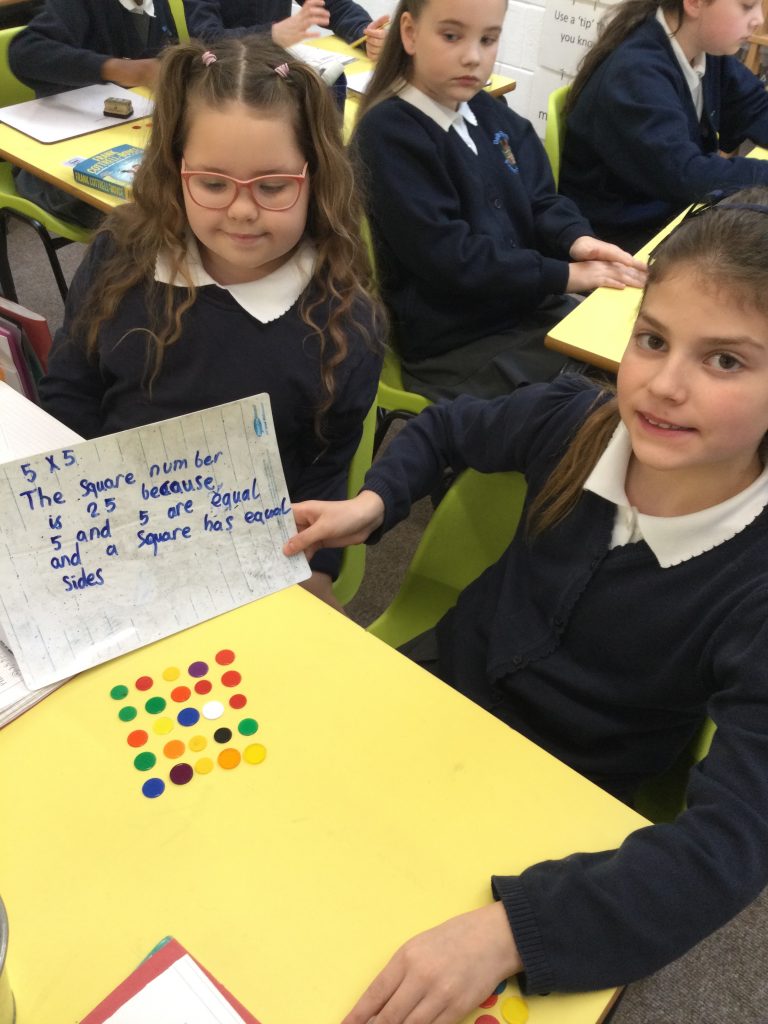 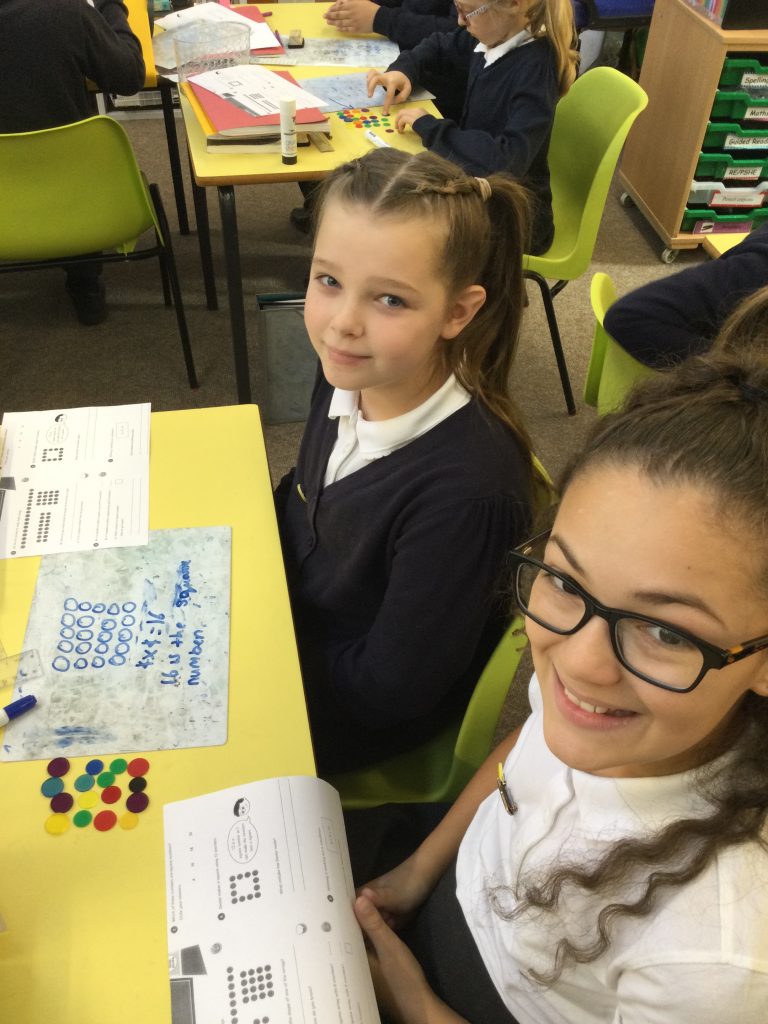 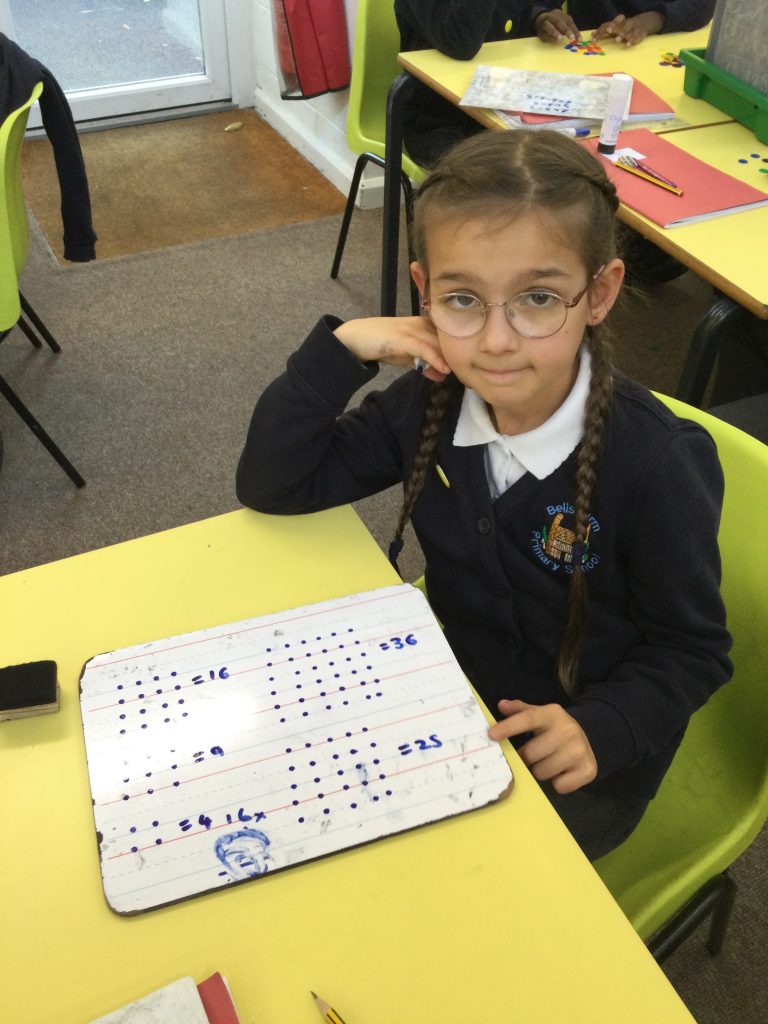 Today Year 5 looked at another question:
​What does school already do to help stop bullying and ensure all pupils are happy and safe?

​There were a lot of excellent responses!

It was clear the children know how we stay safe and that everyone is responsible for our safety, which is so important.

We then went on to look at another question:

Who are the people in school who can help us reduce and respond to bullying?

​Again, the children responded with very similar answers and eventually agreed that actually, the answers all amounted to one thing- EVERYONE was responsible for reducing and responding to bullying.

Very impressed Year 5! You have a clear understanding of what we do as a school, how it is done and why we do it. 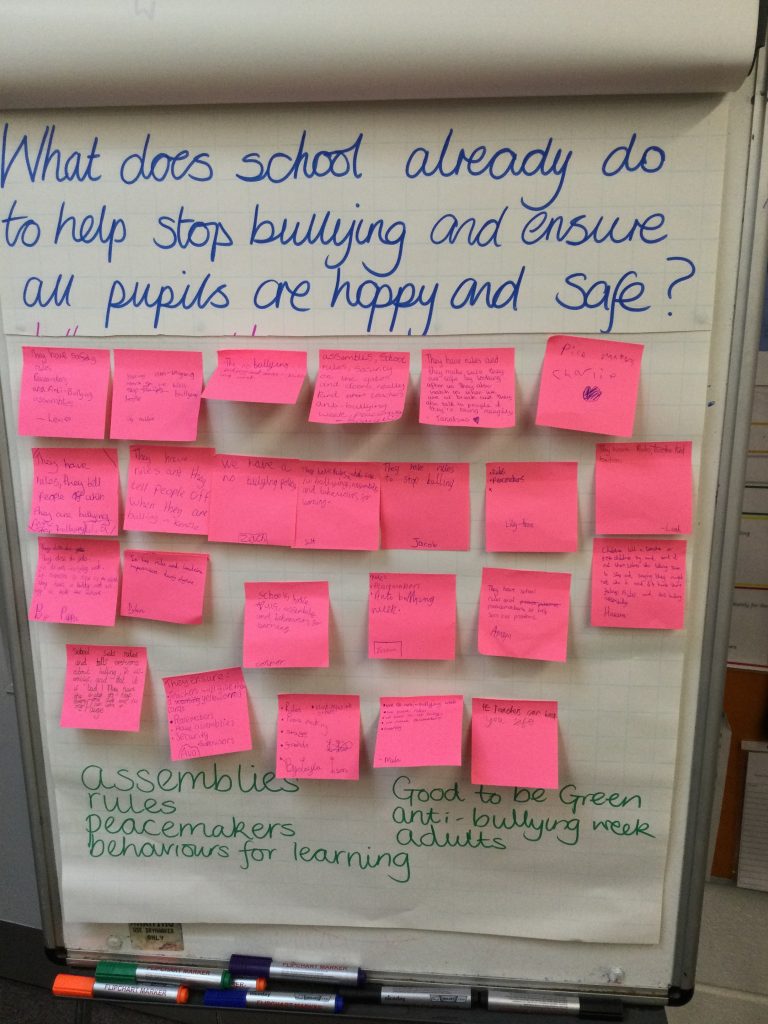 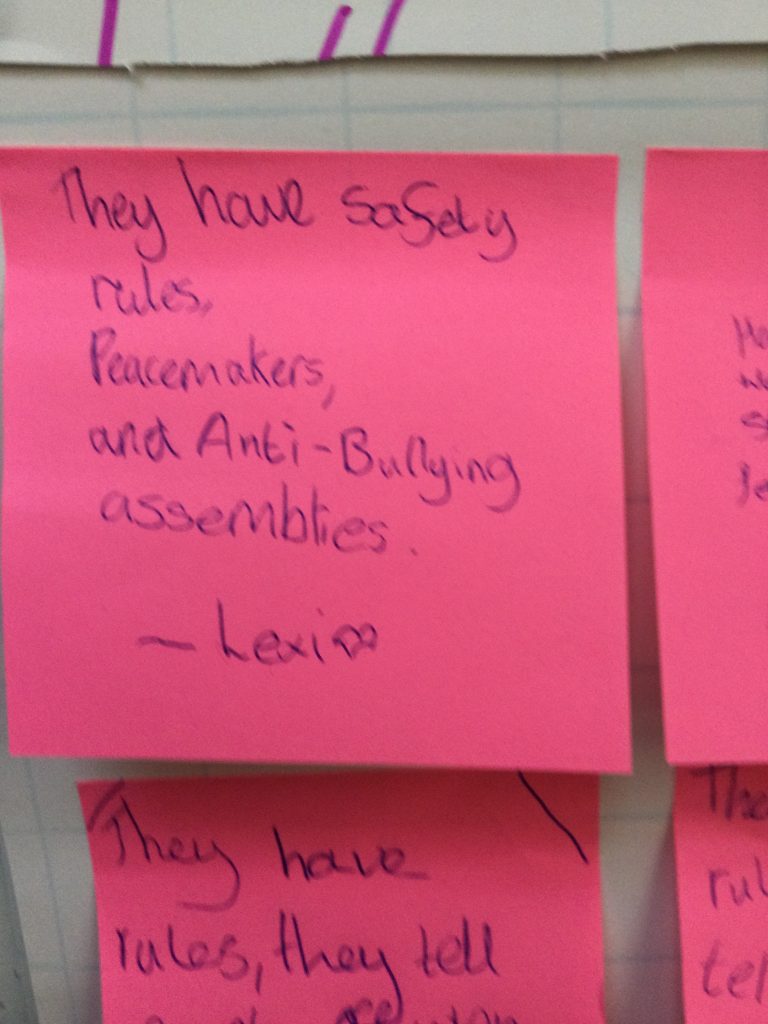 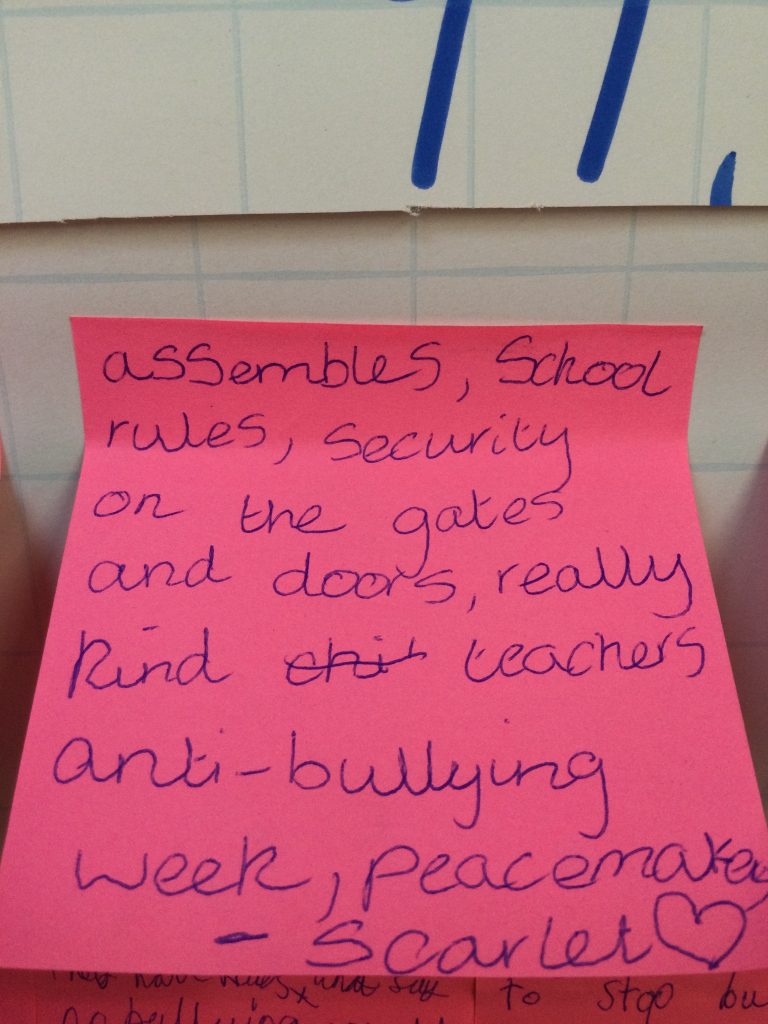 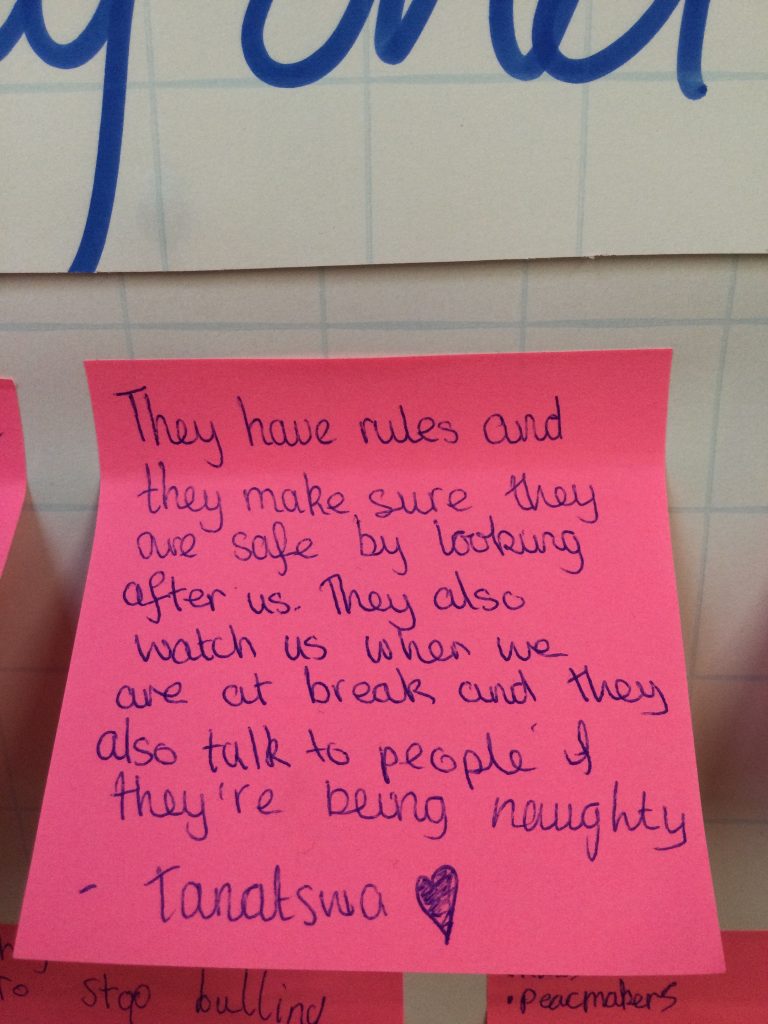 Today the class looked at:

​What kind words have been said to you this week?

There were some lovely responses to this today and a couple of surprises! It was so heart-warming to see that we are a class of children who complement each other, look out for each other and are generally kind.

Tanatswa surprised Mrs Calbreath and Mrs Sabir with lovely notes that created huge smiles, a few ahhhhs and a lot of appreciation. Thank you Tanatswa. What was even nicer was that she gave the notes BEFORE she realised the question on the board!

Kestrels are a very kind class and show it every day. 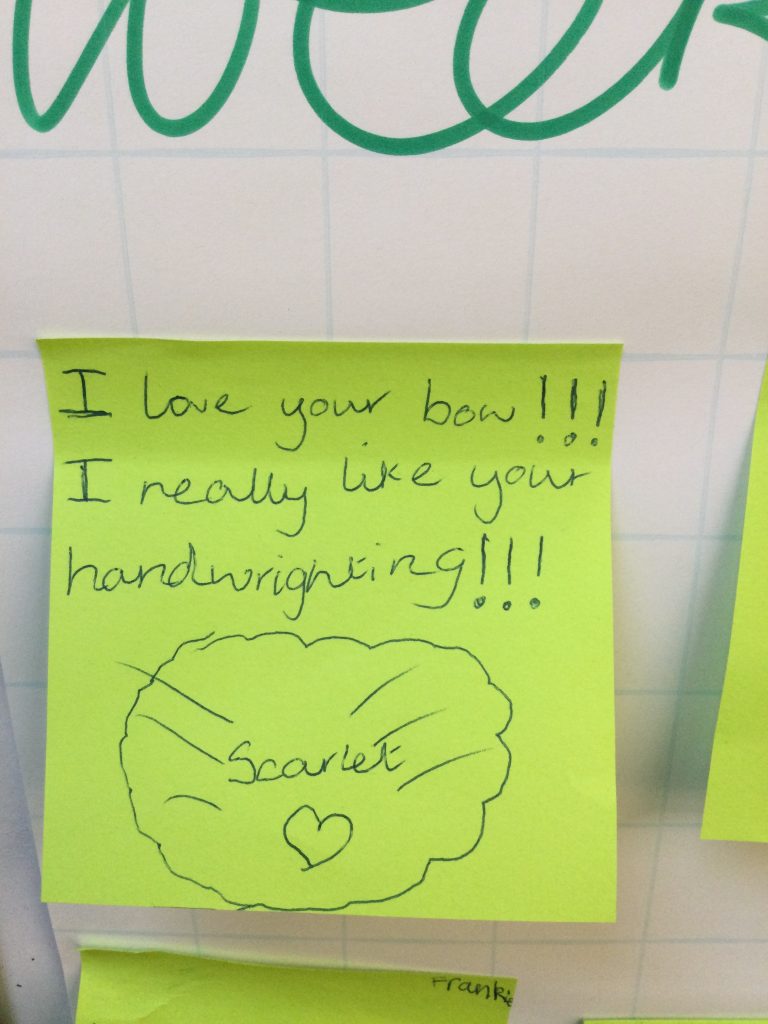 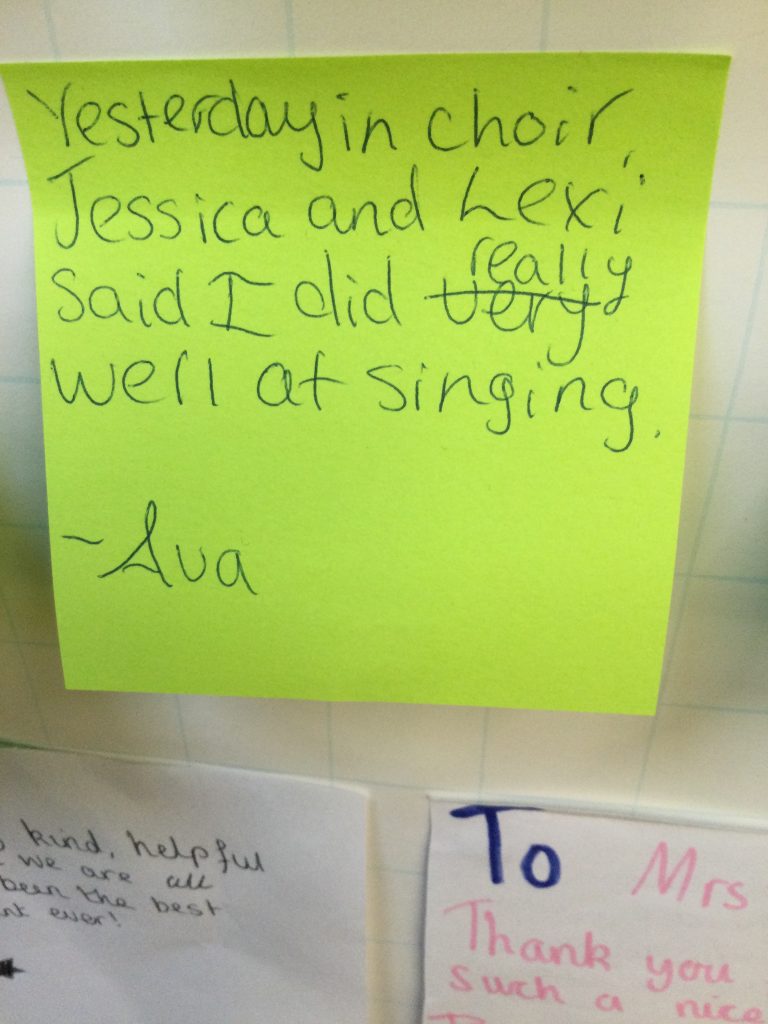 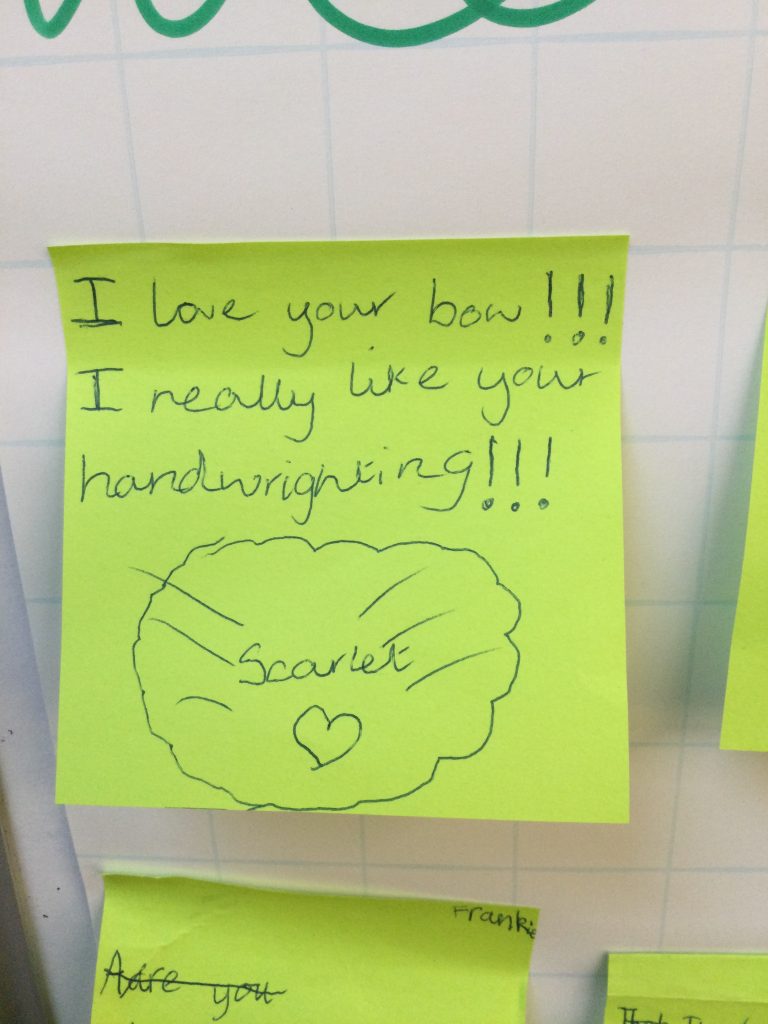 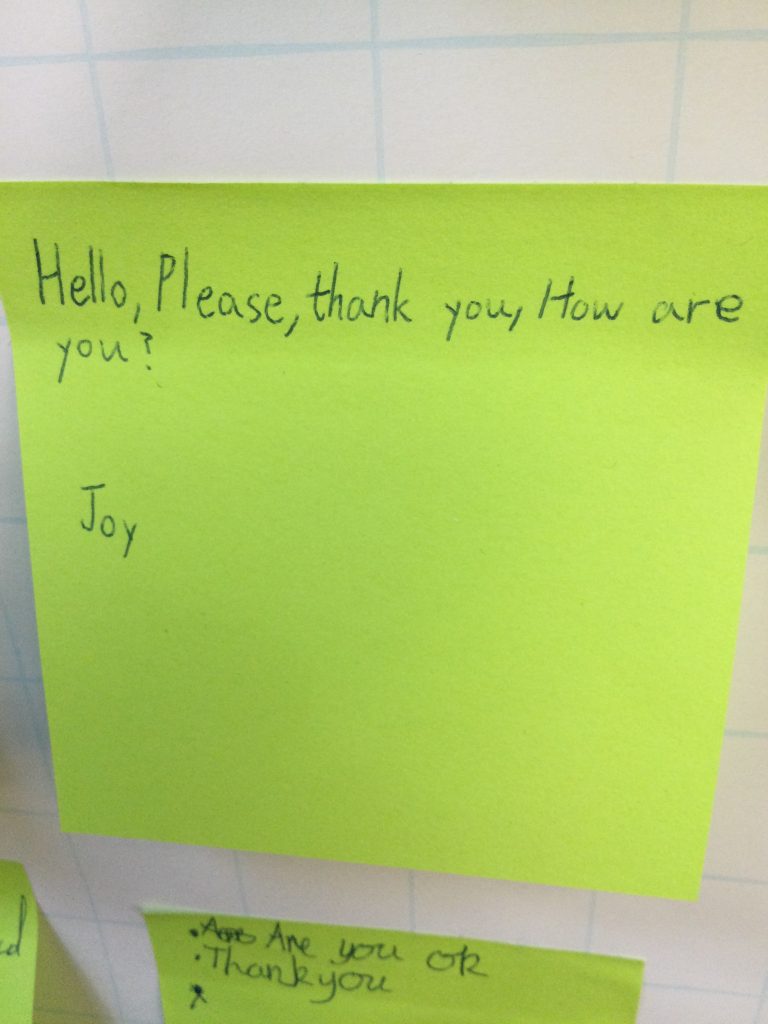 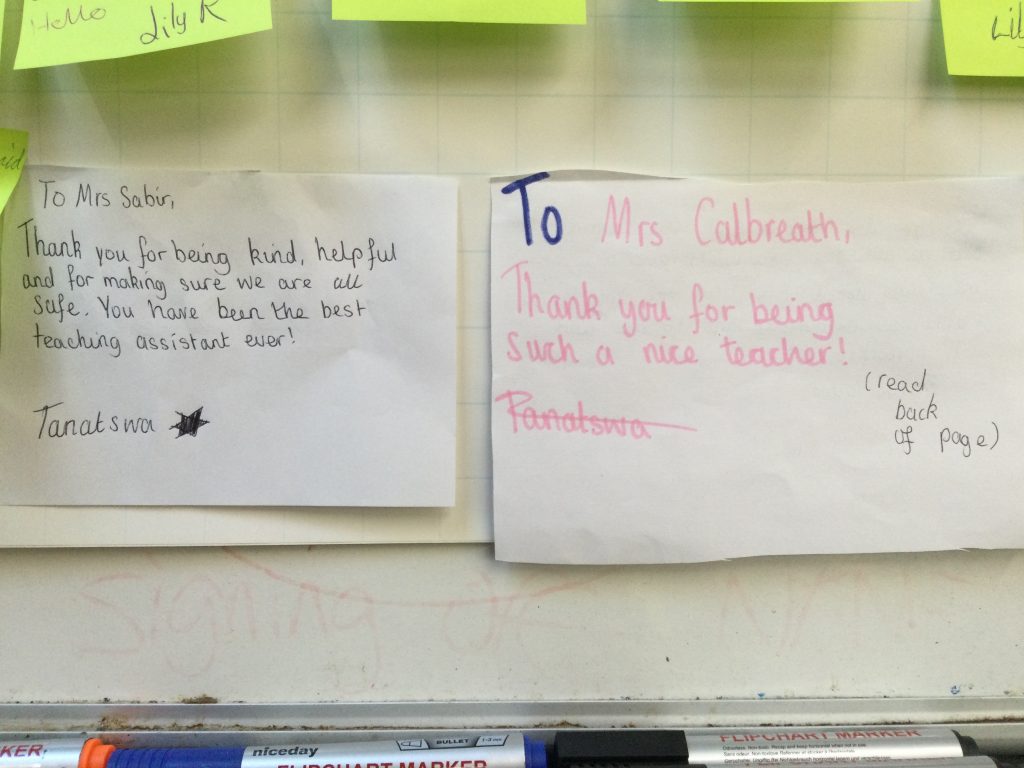 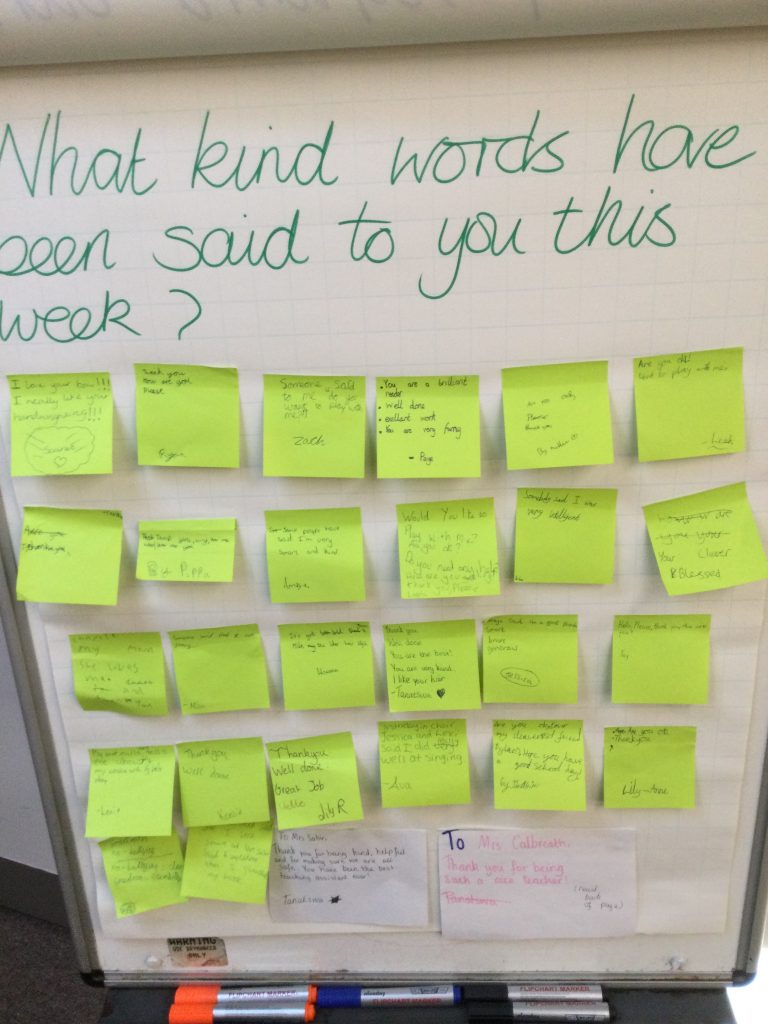 The question was asked:
What acts of kindness can I do today?

The children wrote their responses on post-it notes and put them up on the board.

There were lots of similar responses:

​I will help someone today, especially if they are stuck.

I will ask someone to play with me if they are alone.

I will smile at someone.

I will open a door for a teacher.

Try to be kind to my brother.

Help my mum because she has a cold.

Stand up for someone if they are being bullied. 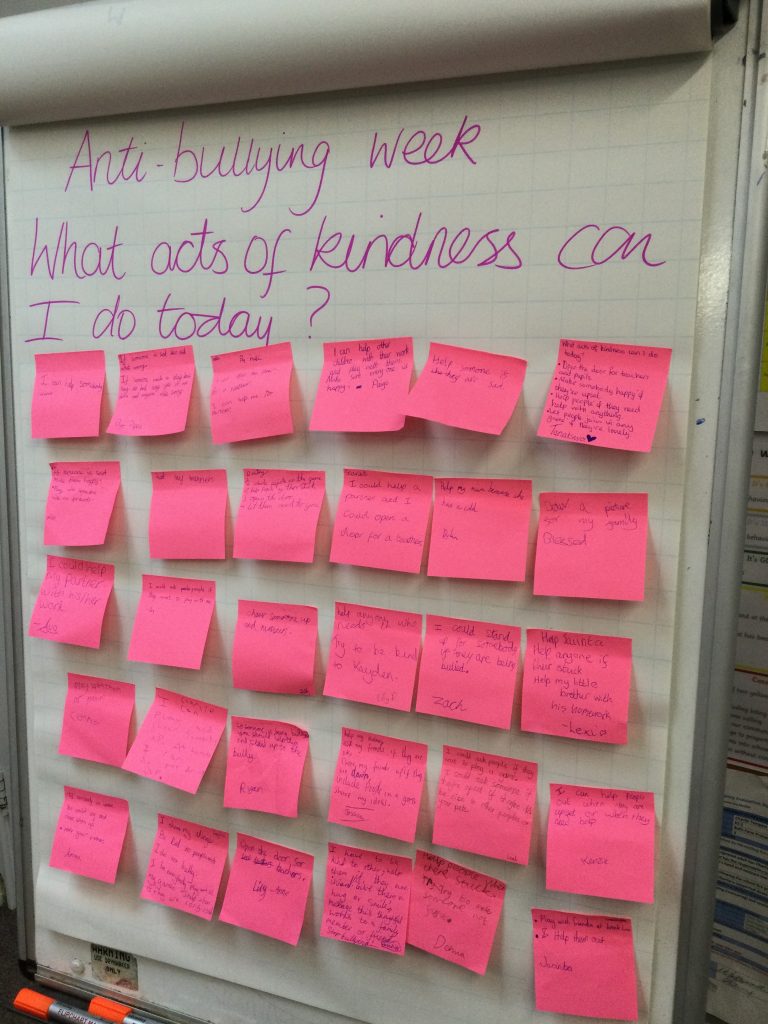